Brixton Trance Underworld returned in style and we now look forward to the first of our regular bi-monthly (every two month) parties.
Next up on the 24th March we return to Friday night clubbing and what a line up we have for our first regular event.

Our special guest for the night is a DJ who in a short time has made a huge name for himself in the scene, Dean Griffiths. Since breaking into the scene in 2009 he has played at some of the best venues around for some huge parties… Including Ministry Of Sound, The Egg, Brixton Academy, Electric Brixton, Gigalum and The Lightbox. He has also graced the White Isle with some tops sets at Amnesia, Space and Bora Bora.
As a producer he has seen releases on Freegrant Music, Pleasure Records and Music Matters Recordings. We can’t to see what Dean has lined up for us.
Below is a free track from Dean to get you in the mood!

Our next guest is no stranger to the 414 as he makes his third trip to Brixton Trance Underworld. Eric Zimmer. Eric’s enthusiasm for the scene shows in his monthly radio show Trance is Here. As a producer he has seen several releases on Delaforce, D.Max and Messany Records.
He has played at events like Trance Sanctuary, Blue Wings Sessions and of course.. Brixton Trance Underworld.
And here is another freebie from our guests!

On warm up duties we have the legendary K.A.R.L… If you partied in the mid 2000’s you’ll have no doubt shaken your thing to his amazing Tech influenced sets.
His own promotion One was massively respected and he guested at all the big parties of that era including Zoology, Twisted, The Gallery, Antiworld… Everywhere.
We await his warm up with much anticipation. His set will be worth arriving early for!
No freebies from K.A.R.L. but here is a link to his Soundcloud page.

Last, but not least, on the guest front is John Wheatland who is the driving force behind Red Matter Promtions. John’s sets at Bioshokk and the Peach Reunion have left crowds begging for more and we’re looking forward to him closing out our event.
And again… Here’s a Soundcloud Link.

BTU is nothing without it’s three stellar residents and Latex Zebra, B.S.E and Matt Church will be delivering a special 2 and a half hour 3 way back to back!

See Event on Facebook £5 Before Midnight – £10 After Get Tickets! 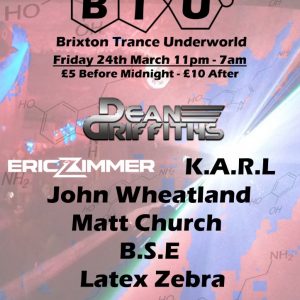