The biggest date in the clubbing calendar at the capital’s most iconic music venue. The London debut of Full on Ferry has continued to send forums and blogs into overdrive, with the night widely recognised as one of the biggest New Years Eve events to take place in the capital in recent years. Early Bird tickets have already completely sold out with saver tickets now selling at an incredible speed.

Ferry Corsten will headline of course, bringing to an end a six year hiatus since he last played at the legendary O₂ Academy Brixton. In a UK NYE EXCLUSIVE performance, Ferry stipulates this as being his “biggest ever UK show to date,” representing a new dawn for the acclaimed FOF series. Ferry is an undisputed trance legend whose intricate melange of precision mixing, top tunage and an inimitable flare, can transform any dancefloor into a musical amphitheatre.

Ferry will be joined by a true musical force in Dash Berlin. 2011 has been another great year for Dash as illustrated with his climb in the DJ Magazine poll, this year breaking into the top 10 at number 8. His global popularity can be accredited to his outstanding DJ sets at the world’s leading festivals and prolific productions such as ‘Disarm Yourself’, ‘Apollo Road’ and ‘Better Half of Me’. He brings to a close the finest year of his career at Full on Ferry and will show precisely why he is viewed as one of trance music’s hottest properties.

As one of the most popular figures in dance music, it’s a great pleasure that BBC Radio 1’s Judge Jules has selected Full on Ferry to welcome in 2012. An incredible career that has notched up hundreds of thousands of miles, countless gigs in far-flung destinations and numerous awards, has meant that Jules is firmly established as a household name. The dark and rumbling nature of his new track ‘City Lights’ is sure to shake Brixton to its core as Jules brings his usual blend of past anthems and future classics to the capital once again.

Ramping proceedings up a gear, Brixton goes ‘In Search Of Sunrise’ with Richard Durand. There’s no doubting the celebrated status that ISOS has amongst trance fans, with its trademark beats propelling the series into unchartered territory. Add to that Richard’s outstanding CDJ wizardry and it should come as no surprise that his support was enlisted immediately for Full on Ferry’s London debut.

Marcel Woods ‘Musical Madness’ compilation combines a manic melange of energetic trance, tantalising techno and everything in between. Augmenting this with Ferry’s trance belters makes this lineup addition truly mouth watering. Marcel Woods ‘BPM’ has been a ferocious track in Ferry’s 2011 outings, not forgetting the tech trance stamp of approval on Marcel’s mix of Ferry Corsten ‘Whatever’. A match made in heaven, we’re delighted to add Marcel to the NYE line-up.

Sied van Riel’s unrelenting style has wowed fans and critics alike, meaning he really is an act for the big occasion. This summer’s itinerary is testament, with appearances at Ministry Of Sound’s landmark twentieth birthday and at Full On Ferry Ibiza just two dates on a jam-packed schedule. Indicative of a wide ranging philosophy, expect a raucous buzz when Sied takes to the decks this NYE.

With Lee & Slater and Nick The Kid warming things up in the main arena and further rooms hosted by Bootleg Social, Retox and Spinning Quickly, Full On Ferry London is undoubtedly London’s biggest New Years Eve party. Just one question remains: where will you be when we step into the future? 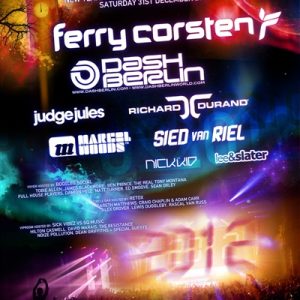