Back in September 2011 after an awesome 6th birthday party the Puzzle Crew decided to take a break from putting on some of London’s best underground dance music parties to concentrate on other projects for a while. Well here we are a year on and the time has flown by. As we came up to our next anniversary, we decided we simply couldn’t let the occasion pass without a good old shin-dig, Puzzle stylee! We at Puzzle HQ are very proud to present:

THE VENUE
…
We’re delighted to have secured the magnificent Raving Buddha as our venue. A blistering Funktion 1 sound system combined with a party atmosphere and a wide selection of reasonably priced draught beers and liquor make this the perfect place to cause some serious mayhem.

There could be only one line-up for our birthday party. We’ve put together a series of tantalising back-to-back match ups – a roll call of past and present Puzzle resident legends, a team renowned for their ability to provide the ultimate party soundtrack. First up….

Fresh from rocking the Egg for Itch Records in August, our first b2b pairing will be getting the crowd’s blood up with a 2 hour set progressing from infectious and funky tech and progressive house through to groovy and uplifting trance.

Next up are two of London’s best-known psy DJs, both regulars at some of the capital’s biggest parties such as Halcyon, Party Proactive and Psychedelic Academy. They’ll be twisting things up with a not-to-be- missed psychedelic set with a progressive flavour.

Increasing the tempo will be our next resident pairing – LK and renowned party animal Timmy Whizz! From 11-12 they’ll be ramping things up in emphatic style with a selection of the finest harder- edged trance cuts out there!

Two legendary former residents return to grace the decks at our birthday bash – Gordon Darling and Ben Bennett! Separately both are incredible DJs, but when they come together something very special indeed happens. Those of you who’ve caught the Gordon Bennett Experience before know this rare conjunction of musical legends is simply not to be missed!

So there we have it – great music, cheap drinks, a wicked party vibe and – unbelievably – NO COVER CHARGE! Get yourselves down to the Buddha for what looks set to be a fantastic night – don’t be the missing piece! 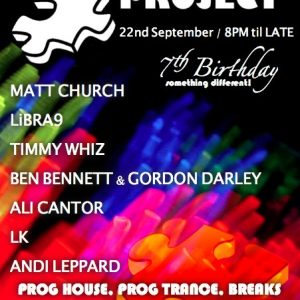